Are you tired during the day even though you’re getting enough sleep at night? Is this excessive sleepiness causing you to fall asleep while at work, doing chores or even driving?

You may be suffering from narcolepsy. Arguably the least well-understood sleep disorder, narcolepsy does not always take on the form of the dramatic depictions we’re familiar with on the TV screen.

In fact, this sleep disorder affects approximately 1 in every 2,000 people. While the severity of its symptoms can vary widely, in all its forms narcolepsy has the potential to disrupt your life.

Narcolepsy is a complex sleep disorder that is caused by a blurring of the lines between sleep and waking states. People with narcolepsy often feel sleepy all the time, and experience odd phenomenon associated with passing in and out of a sleeping state (such as sleep paralysis and hallucinations).

In certain cases, narcolepsy presents with sudden episodes of cataplexy (partial or total loss of muscle control). In most cases, people begin to experience symptoms of narcolepsy during adolescence and early adulthood (15-25 years); however, the disorder can arise at any age, even in infancy.

To make matters more difficulty, due to a lack of understanding and familiarity with its presentation, narcolepsy often goes undiagnosed for a number of years.

Narcolepsy affects the way you navigate the stages of your sleep cycle: deviating from the normal progression through stages 1, 2 and 3 (otherwise known as non-REM sleep) and finally into REM (rapid eye movement sleep).

People suffering from narcolepsy skip the stages of non-REM sleep completely, jumping right into REM sleep almost immediately. You may also suddenly switch into a REM state throughout the day.

REM sleep is the stage of sleep during which dreaming happens, and muscle paralysis prevents us from acting out these dreams. This ability to switch from awake to REM sleep is believed to be responsible for many of the symptoms of narcolepsy.​

The symptoms of narcolepsy are believed to be the consequence of this thinning of lines between being awake and being asleep. While many of these things are completely normal when they occur at night, when we’re nestled in bed asleep, they can cause a lot of issues when they happen throughout our waking hours.​ 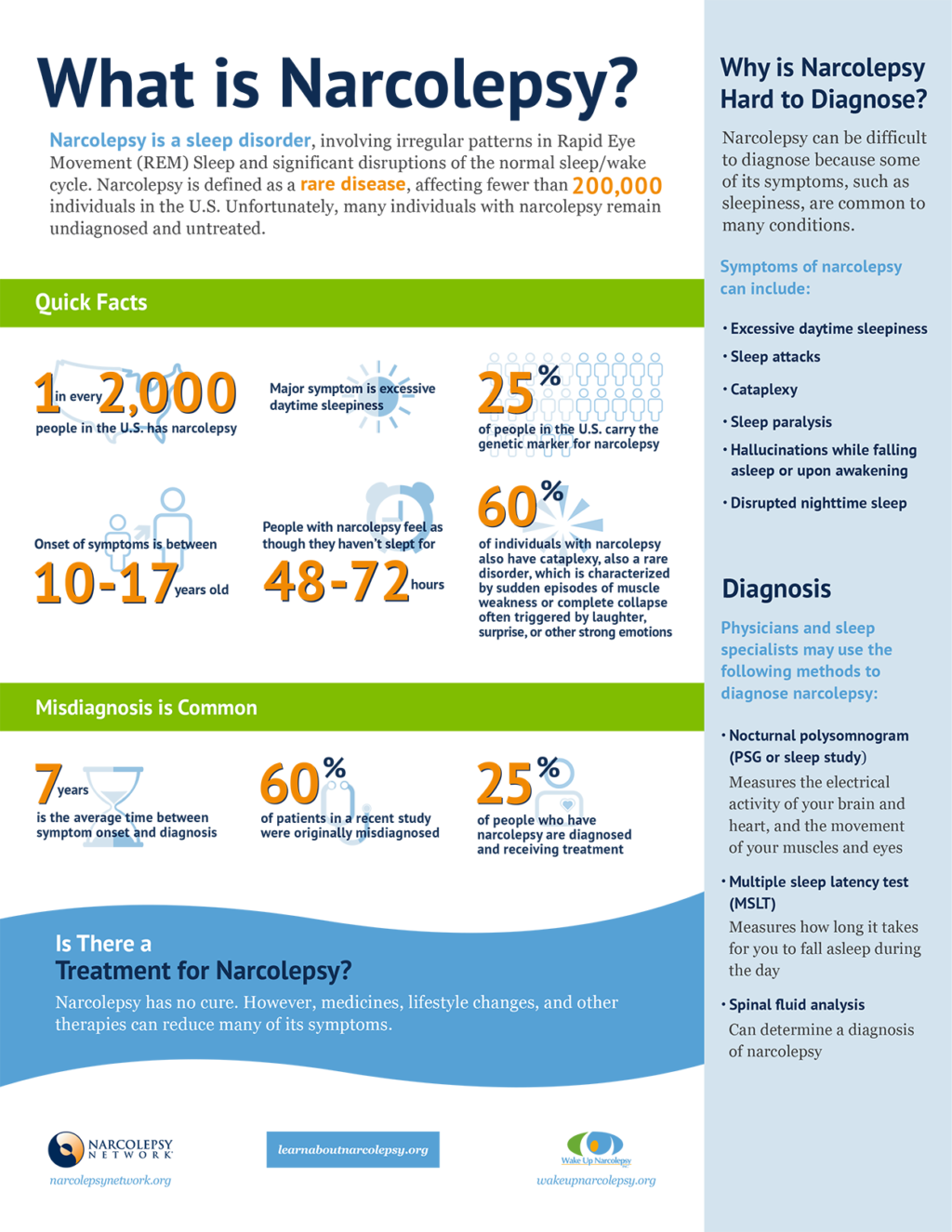 Narcolepsy causes people to feel extremely sleep most of the time, and you may even fall asleep while performing normal daily tasks. Your sleepiness may be so severe that it interferes with your ability to carry out life’s responsibilities.

You may experience symptoms of sleep deprivation, even if you’ve had adequate sleep the night before. These include: brain fog, a general lack of energy, poor concentration, memory problems, and depression.

Sleep attacks are sudden, uncontrollable episodes of falling asleep. They can happen while you’re going about any activity, and occur at all times of the day.

Some of these intermittent attacks are very brief (lasting only seconds), and you may experience “automatic behavior” during them — that is to say, you’ll continue to carry out the activity while asleep. When you awaken you have no recollection of what you were just doing.

Sleep attacks can be a particularly concerning symptom. If one arises while you are driving or operating machinery you could suffer serious injury.​

When the muscle paralysis associated with REM sleep occurs spontaneously during waking hours this is known as cataplexy. This sudden loss of muscle tone can cause slack jaw, weakness in your limbs, slurred speech and ever total body collapse.

Interestingly, cataplexy is often triggered by experiencing an intense emotion, like laughter, anger and surprise.

Not everyone with narcolepsy will experience cataplexy. For those that do their frequency varies greatly: You may have only 1-2 episodes per year, while other people have numerous episodes each day.​

One of the more eerie symptoms of narcolepsy is frequent hallucinations. They’re called hypnagogic when they occur with the onset of sleep, and hypnopompic when they happen as you’re waking up. These types of hallucinations are most commonly visual, but any of your sense can be involved.

While many people will have an experience with hypnagogic or hypnopompic hallucinations during their lifetime, people with narcolepsy have them on a regular basis.​

Sleep paralysis is another freaky phenomenon that people without narcolepsy may experience at some point; again, it’s far more common in people suffering from the disorder.

This is yet another case of characteristics of REM sleep occurring while you’re awake. Suddenly shifting into and out of REM sleep can cause you to be consciously awake while experiencing peripheral paralysis.

The episodes are typically brief, lasting from a few seconds to several minutes in length. During this time you’re unable to move or speak, and they may be accompanied by hallucinations.​

Narcolepsy often presents alongside other sleep disorders, like sleep apnea, restless leg syndrome and insomnia. This can make getting the right diagnosis even trickier.

The exact cause of narcolepsy is unknown, but researchers are hard at work identifying genes and structural abnormalities that are associated with the disorder.​

The Role of Hypocretin

These studies have found a link between narcolepsy with cataplexy and low levels of hypocretin — a neurotransmitter which plays an integral role in regulating our sleep wake cycles. Normally hypocretin is secreted during waking hours in order to sustain alertness and prevent REM us from entering REM sleep at the wrong (often inopportune) times.

Hypocretin is primarily produced in a cluster of cells located within the hypothalamus. In people with narcolepsy with cataplexy this area is damaged or even completely destroyed.

While scientists have pinpointed a role for hypocretin in narcolepsy, they have not yet been able to answer what causes these individuals to have low levels of the neurotransmitter in the first place.

Additionally, there remains a small subgroup of people with narcolepsy who have normal levels of hypocretin. Science does not yet have an answer as to what causes the disorder in these cases.

Some mechanisms that have been proposed include:​

Another proposed cause of narcolepsy is an issue with immune function that causes antibodies to attack healthy cells.

In 2010, Swiss scientists discovered that the immune systems of some individuals with narcolepsy produce antibodies against the protein trib 2. This protein is also largely produced in the hypothalamus, just like hypocretin; and this dysfunction leads to lower levels of both compounds.​

How Narcolepsy Is Diagnosed

If you think there is a chance you are suffering from narcolepsy you should make an appointment with your doctor. During your visit your doctor will do a regular physical exam and take a detailed medical history to rule out any other conditions that may be causing your symptoms.

Your doctor will then ask you for more specific information concerning your sleep:​

Your doctor will ask you a series of questions in order to get a detailed understanding of your sleep history over your lifetime. As part of this examination you may be asked to fill out the Epworth Sleepiness Scale. This questionnaire is used to determine your level of daytime sleepiness.​

You may be sent home with some homework to complete before your next appointment. Keeping a sleep diary for a week or more can help your doctor see if your sleepiness is related to poor sleep patterns or not.

Your doctor may also have you wear an actigraph, a small device worn on your wrist that gives an objective measures of periods of rest and activity.​

The next step in your diagnosis will be having some specialised testing done at a sleep disorders clinic or sleep lab. These tests will be able to answer definitively whether or not your have narcolepsy.

During the PSG, you will spend the night at a sleep lab having continuous multiple measurements taken while you sleep. Together the data will indicate if there are any abnormalities in your sleep cycles.

For diagnosing narcolepsy, the PSG will show if REM sleep is occurring at odd times throughout your sleep cycles. The test can also be used to rule out other sleep disorders.

The MSLT takes place during the day and is used to get a measure of how often you fall asleep throughout the day. This test can also show if elements of REM sleep are occurring while you’re awake.

You’ll also be asked to take five naps, typically two hours apart. This part of the test will determine how long it takes you to fall asleep, and if you move into REM sleep abnormally quickly.​

While there is no cure for narcolepsy your symptoms can be managed through a combination of medical and behavioral therapies. With treatment, the majority of people are able to return to their normal productive selves.​ 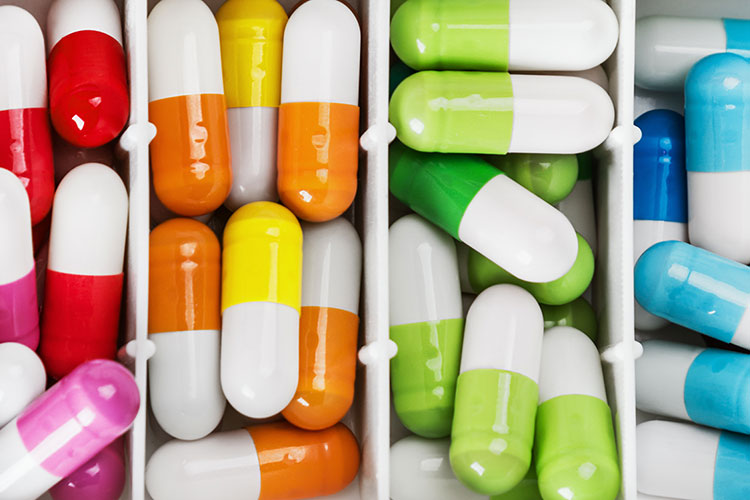 Medical stimulants are typically prescribed in order to help you stay awake throughout the day. Unlike older stimulants, new medications such as Provigil (modafinil) and Nuvigil (armodafinil) are less addictive and have fewer highs and lows.

However, when these medications fail your doctor may prescribe you methylphenidate (the stimulant used in Ritalin) or an amphetamine.​

These medications, commonly referred to as antidepressants, are actually very good at suppressing REM sleep. Taking an SSRI or SNRI (such as Prozac or Effexor) can help reduce cataplexy, hallucinations and sleep paralysis.​

Xyrem is very effective at treating episodes of cataplexy, and can also improve the overall quality of sleep in narcolepsy. At high doses it can also help reduce daytime sleepiness.​

Aside from medical treatments, making some behavioral adjustments can help reduce your symptoms: 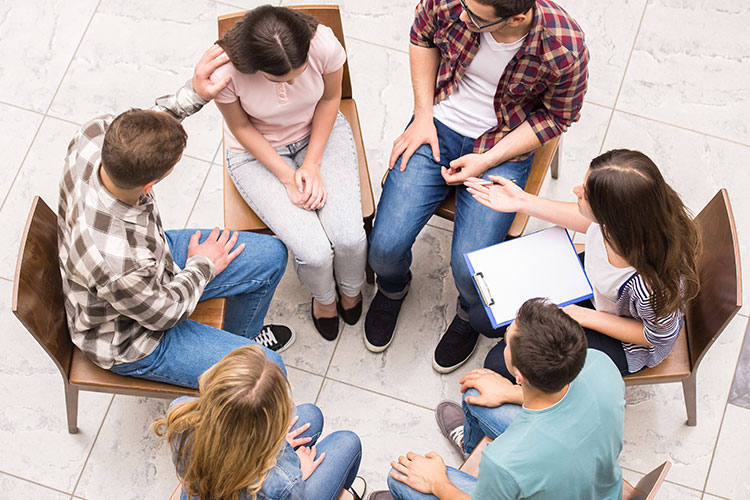 Living with narcolepsy comes with its own challenges. While your doctor and sleep specialist can help you manage your symptoms, living with an incurable disorder can have a significant impact on all aspects of your life.

Attending counseling, education sessions and support groups can help you cope with your diagnosis. Having a support system that understands and shares your experience will help relieve feelings of loneliness, anxiety and stress.​

You can locate a support group in your neighborhood by either asking your doctor for a referral or using Narcolepsy Network, Inc.’s online directory.

Narcolepsy Network, Inc. has founded a private Facebook group to offer a safe online environment for patients and their loved ones to connect. The group is very active, with over 4,000 members and daily discussions covering a wide variety of topics related to the disorder.​

Keeping track of your symptoms and changes in your condition whether for diagnosis or for follow-up care can become burdensome. These nifty tools are easy to use and can help you provide your doctor with the most comprehensive information and improve your care.

This is the first-ever smartphone application designed specifically for narcolepsy. With one click you have access to a diary to track your symptoms, as well as a wealth of information about your condition: including infographics, videos, slides and more. (Search NACJF in the app store.)

Fitness trackers (such as FitBit) can be a powerful tool for helping you keep track of when you sleep and how much sleep you are getting over the course of the day. Data from wearable fitness trackers are a great source of insight for your doctor while you’re en route to getting a diagnosis.​